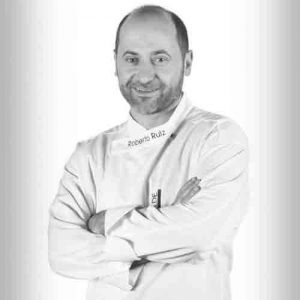 Roberto Ruiz started his career when he was 16 thanks to his father, who was cooking in a Hunting and Fishing Club. Roberto attended the Culinary College of Donostia and then he worked with Martin Berasategui. When he was 23 he started cooking at Fronton in Tolosa where he is still now after more than 20 years. His idea of gastronomy is founded on the best raw materials and on their original properties  and qualities. He avoids heavy cooking process, in order to keep unchanged the original flavour and texture of the ingredients.