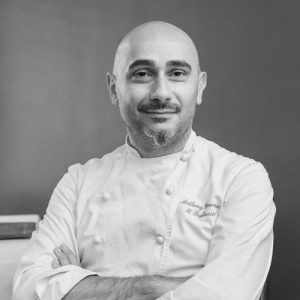 The essence of Anthony Genovese and his cuisine is an institutional basis that is firmly rooted in tradition, combined with pairings and ingredients that are more creative, international and personal, along with a reverence for high quality raw materials.

From deeply-rooted Calabrian origins and with an intense passion for cooking, the principle of his culinary training began in France. After attending the Ecole Hôtelière de Nice, training in French restaurants and further Italian training at the Enoteca Pinchiorri in Florence, he developed an attraction for Asia, where he then continued his experiences in Japan and Malaysia. He returned to Italy in 1997, when he received his first Michelin star at the Rossellinis* restaurant at the Hotel Palazzo Sasso in Ravello.

In 2003, he decided to open a new restaurant in Rome, Il Pagliaccio**, with his friend and business partner Marion Lichtle, a unique place inspired by the atmosphere of travel experiences, both in its furnishings and culinary creations.
In 2015, his restaurant joined the prestigious Relais & Chateaux Association, an acknowledgment that supports the double Michelin star earned over the years.