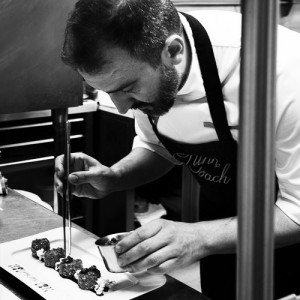 Chef of the Punk Bach Restaurant in Madrid as well as of the Café Niza, Iñaki Rodaballo, since the first years of his career developed the “más alto en el mundo de la cocina en miniatura” philosophy, meaning creating the finest specialty in small size. Thanks to his mentor, Senen Gonzalez of the ASADOR SIDRERIA SAGARTOKI, an institution both in the province of Alava –Spain- and in national gastronomy.

Expert in tapas e pintxos, characteristic specialties of the Spanish culinary tradition recognized internationally, since 2000, almost every year, he was awarded as representative of this field. Winner of the Pintxos y Tapas de Valladolid Competition in 2014, with his signature¿Qué percibes? , in 2011 he won also the Euskadi Pintxos Competition in 2011 held in Basque region with Chip’s&Ron, a creation that join the mixology universe with gastronomy: a composition in a cocktail glass where grilled calamari, potatoes cream and yucca chips, are topped with spherified rum flavored with lemon twist and drill.

He brought his creative vision at Punk Bach, one of the top venues in the city.