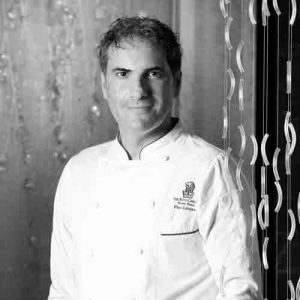 Chef Pino Lavarra enchants his guests with a menu based on Italian traditional ingredients, presented in an innovative way which reflects his passion and creativity. “I will bring my experience and my passion to the Tosca Restaurant where I will introduce the Southern Italian gastronomy. My dishes will be enriched by the main Asian ingredients that can be well combined with Italian flavours”.

Pino was born in Puglia and inherited the passion for cooking from his mother and his simple and passionate cuisine.

When he was 14, Chef Lavarra started his training in a catering school in Castellana Grotte, to learn the techniques and the basics of the local regional dishes while working in local restaurants and pizzerie in Puglia during the summer. When he was 20 he left Italy for Germany and later for England to explore other cultures and cooking styles. He started his career at the Stafford Hotel, then he moved on for the opening of the Regent Four Seasons Hotel. He also worked with Chef Paolo Simeoni for the opening of the restaurant The Dining Room, which gained national recognition for its creative Italian cooking style. Three years later, he opened Toto’s Restaurant, a prestigious fine dining restaurant in Knightsbridge.

In May 1996, Pino went to Malaysia, where he learnt a lot on spices, aromas, and oriental cooking techniques. In 1997, he came back to Italy with the famous Italian chef Anthony Genovese to open a hotel on the charming Amalfi Coast. He fell in love with the Mediterranean aromas and the natural products that today are part of his cooking style. During the winter of 1998, he went to Le Manoir Aux Quat’Saison, Oxford, as sous chef of Raymond Blanc.

In January 2001, he returned to Italy and became Executive Chef of Rossellinis, Palazzo Sasso. It marked a major turning point in his career as he was then recognized as “One of the Best Chefs in the World” by the American Academy of Hospitality Sciences and Rossellinis being awarded One Star Michelin. In 2004, Rossellinis was awarded the Second Michelin Star.

In April 2013, Chef Lavarra was appointed as Head Chef at restaurant Tosca, The Ritz-Carlton, Hong Kong. Tosca’s menu is influenced both by Lavarra’s time spent in Malaysia and also by the dishes served in Lavarra’s two Michelin-star restaurant Rossellini’s in Italy.