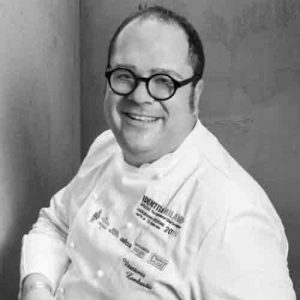 Vitantonio Lombardo was born in 1979 and started his appresticeship when he was 15. He trained with many important and renowned chefs: thanks to the experience gained with Paolo Teverini, Succi Silver, Gianfranco Vissani, Fabio Barbaglini and Davide Scabin, chef Vitantonio could improve his cooking techniques, his creativity and the correct use of raw materials. In January 2009 chef Vitantonio started working at Locanda Severino as head chef and in 2012 he became the owner of the restaurant. He focused on traditional recipe combined with modern techniques and seasonal ingredients. In 2011 Vitantonio was awarded with 2 “forks” by the popular guide Gambero Rosso, in 2012 he received 1 Michelin star and in 2013 1 chef’s hat by L’Espresso guide.