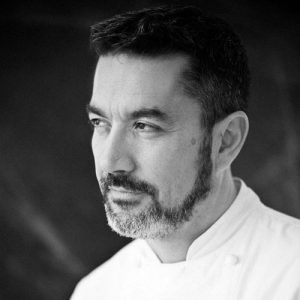 Born in 1971, he took the long way before arriving in front of the stove. In 1997, he took over the historic Caffè Elena in Piazza Vittorio and turned it into the first high-class wine bar in Turin, with more than 1600 labels in the wine cellar.

In 2003, building on his success with critics and the public, he opened his first restaurant with the same name. Here again, he only managed the dining hall. From 2003, he began a process of transformation that brought him closer to his true passion: cooking. The years spent at the Locanda Rizieri in Diano d’Alba were years in which he studied and experimented. In 2009, he moved to Catiza, in the heart of Alba. It was then that the first official recognitions for this “late-blooming” chef came to be. Since 2012, he has managed the kitchen of the San Quintino Resort in Busca, where in his first year he won the two forks of the Gambero Rosso, 15/20 from the Espresso Guide, the Corona Radiosa from the Guida Critica (Critics Guide) and Golosa from Massobrio.

Since 28 June 2016, Ivan Milani has accepted the challenge to give a face and a personality to Piano35, the restaurant located on top of the skyscraper built by Renzo Piano, in the heart of Turin.