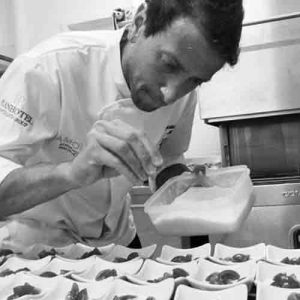 Christian Milone, born 1979, is executive chef at the Trattoria Zappatori. He attended the culinary institute in Pinerolo and he was shaped in the kitchen of Enrico Crippa, (Piazza Duomo di Alba). His cookery is strongly bound with the Piedmontese tradition, developed with creativity in the family restaurant. In the Gastronavicella (its laboratory for new recipes) Christian can experiment his creativity. In 2012, winner of the Birra Moretti Grand Cru Award, sponsored by Birra Moretti and Identità Golose. He is in the Jeunes Restaurateurs D’Europe group and was awarded asTop Chef di domani by the Touring Club Guide 2013.