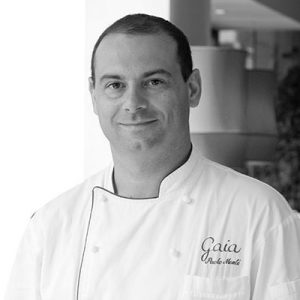 Paolo Monti has been cooking for Gaia Group in the past 12 years. Having been promoted as the Group Executive Chef in 2011, he now helps conceptualize menus and looks after all Italian restaurants in the Group. With a respect for Italian culinary tradition, his cooking style is authentic yet prepared with a modern twist. A native of Rome, Paolo grew up in a family where food was an essential part of daily living. His grandmother’s side grew vegetables in the countryside, and made cheeses and breads while his grandfather’s side cultivated grapes for his family’s consumption. Surrounded by a family whose work reflected in passion for food, he was accustomed to home-cooking and he did not often eat at restaurants.
At age 15, Paolo started working part-time in a pastry kitchen making breads, cakes and gelato. While studying at a culinary school, he also learned how to prepare hot dishes at Mastro Stefano, Rome. After attaining a Diploma degree in Hotel Business, he worked at some of the world’s renowned Italian restaurants La Terrazza dell’Eden in Fort Hotel Eden, and Da Checco ar 13 ‘mo, one of the oldest trattoria in Rome opened since 1953. Paolo also draws seven years of experience working for a number of leading restaurants in Los Angeles. Rising the ranks as sous chef, he had the experience working at the legendary restaurants like Mauro Vincenti, REX il Ristorante, and Alto Palato Trattoria, which is ranked Top 10 restaurants in LA.
Gaining an all-around experience in kitchen, Paolo’s menu at Gaia Ristorante focuses on Italy’s seasonal ingredients. He delivers his passion through creating Roman-style thin crust gourmet pizzas, light and delicious hand-made pastas, and the finest fish and meat dishes. “Italian cuisine is well-known everywhere for its use of fresh ingredients,” says Paolo Monti. “It is a cuisine which is written in the history and nobody can change it. You can incorporate new techniques but you can’t change its ingredients.”