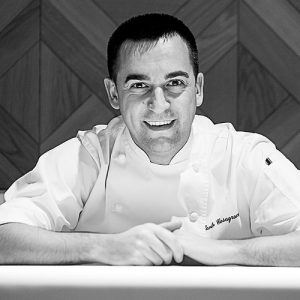 Italian born and very passionate of kitchen from an early age, Paolo Casagrande studied at the Alfredo Beltrame Hospitality School in Vittorio (Veneto) in northern Italy. From a young age he made his way through numerous restaurants in Italy to discover new techniques, discipline and creativity in the world of cooking.

He perfected his culinary skills in prestigious gourmet restaurants in Milan, London, Paris, with internationally renowned chefs such as Alain SOLIVERES.

He later directed the opening of Castadiva Resort, a luxury hotel on Lake Como (Italy).

In 2012 Paolo Casagrande rejoins Martín Berasategui. The complicity and mutual trust between the two makes Martin put him to direct the kitchen at Lasarte restaurant in Barcelona, which has recently been awarded the third star in the Michelin Guide.
Since February 2016, Paolo has been in charge of the gastronomic project of Monument Hotel, under the direction of Berasategui, the new Hotel of Great Luxury, which welcomes the Restaurant Lasarte, Oria Restaurant and Hall0 Bar.
His career has been characterized by the depth of his commitment, consistency, constancy, effort and passion for cooking.