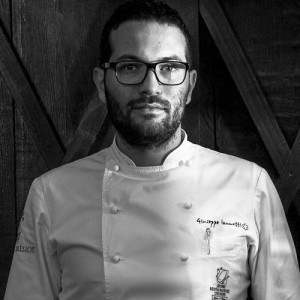 Giuseppe Iannotti, born 1982, has been cooking since he was 6. He is graduating in computer engineering but then he came back to his true love and formed as autodidact. His cooking is featured by “research, inspiration, imagination and extemporaneity”. Since 2011 Giuseppe is leading the Krésios, benchmark for the cookery in Campania (southern Italy).

Awarded as “Giovane dell’anno” for the Espresso and “Premio vent’anni” by San Pellegrino. He participated also to the San Pellegrino Cooking Cup 2013. He is also in the Jeunes Restaurateurs D’Europe group. In 2013 he was been awarded with one Michelin star.